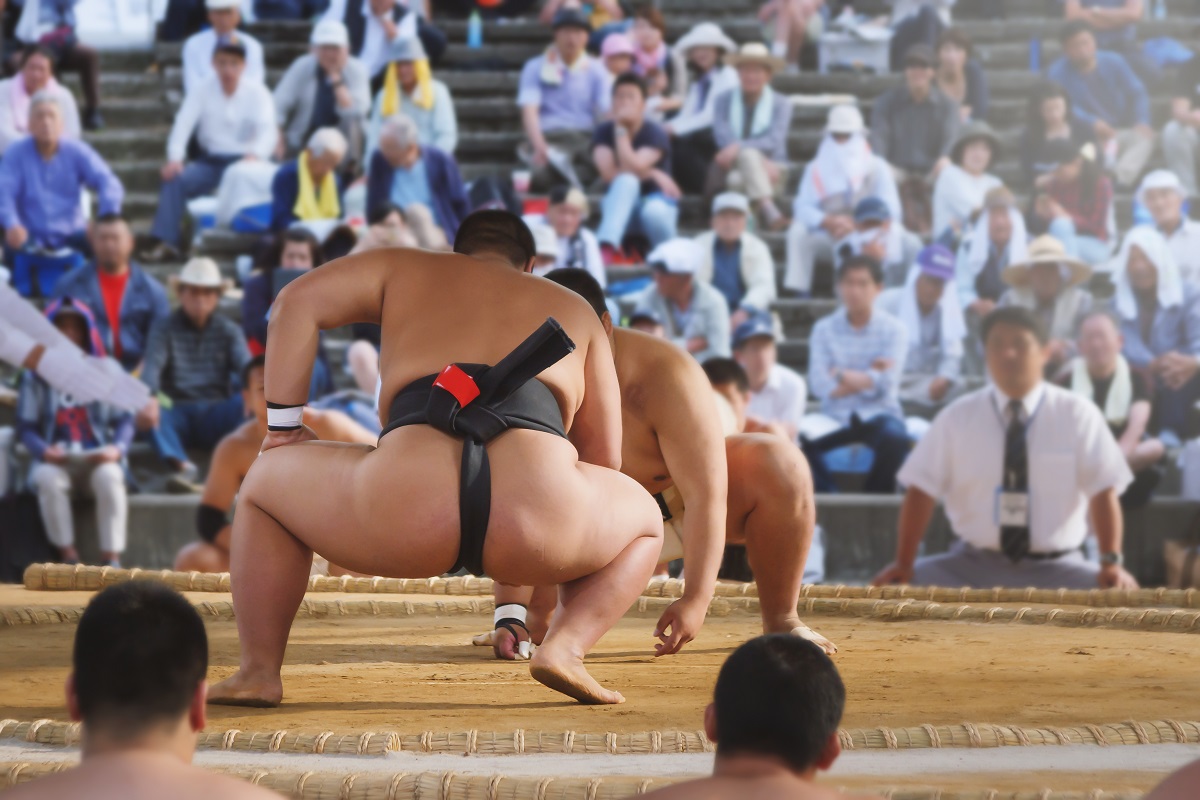 Sumo wrestlers, or Rikishi, are iconic for their massive stature and formidable fight style. The sport was originally created as entertainment for gods of the Shinto religion, and is now Japan’s national sport. These wrestlers train hard, combining gruelling exercise with a high calorie diet for optimal weight gain.

Sumo wrestling has been practiced in Japan for around 1500 years. The first figurines of sumo wrestlers are though to have been made between the 3rd and 7th centuries. At first, sumo wrestling was performed as a ritual to ensure good harvests by appeasing the Shinto gods.

The sport became regulated in the Edo Period (1603–1868 AD). Tournaments were held at first to raise money for holy places like shrines and temples. As time went on, it became commercialized and went from an amateur sport to a professional sport.

Traditions harking back to the origins of sumo wrestling are still honored, for example the iconic foot stomping works to drive evil spirits away, while clapping aims to get the attention of the Shinto gods.

With the regulation of the sport, which used to be a more casual event practiced by a wide number of people, wrestlers began to bulk up. There are wood-cuts depicting larger and larger wrestlers whereas before regulation opponents appeared to be leaner.

Wrestlers also tended to become bulkier and bulkier when the sport began to be televised. Rikishi had the reputation of being enormous fighters and the spectacle of two “giants” fighting one another was considered to make better television. This created competition as the fighters with greater mass became the most popular, forcing smaller fighters to gain weight to compete professionally.

The Physics Behind Sumo Wrestling 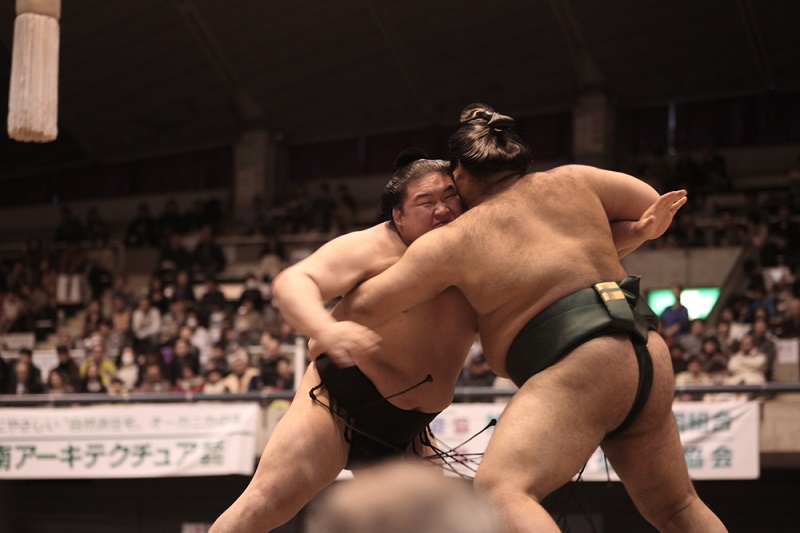 While wrestling is a world-renowned sport with a long tradition and great respect within Japanese culture, many do not stop to consider the science behind it.

This is also why sumo restlers try to gain weight to be more bottom-heavy – hence their ginormous thighs – helping them to remain more stable. A lower centre of gravity keeps them balanced and makes it much more difficult for an opponent to topple them.

Sumo wrestlers have great mass, but they also train to move quickly and catch their opponents off-guard. These factors combine to create impressive momentum which is one key to a successful wrestler.

Rikishi train for short but intense bursts of energy, and each fight usually lasts less than 1 minute.

Rikishi begin the sumo lifestyle aged around 15. They eat, sleep, and train in a specialised centre called a stable.

To gain the mass needed to become a professional sumo wrestler, a specific diet and training regime is required. Top wrestlers usually weigh over 100 kg, and the heaviest ever, Ōrora satoshi, weighed 288 kg at his peak!

To achieve this gigantic weight, they must exceed energy expenditure with energy intake. In other words, they must take in more energy than they are using. Wrestlers will eat great quantities of protein-rich foods including chicken, fish, and tofu. The traditional dish of a sumo wrestler is a stew called chanko nabe.

Following the stew, wrestlers can consume as many bowls of rice as they can manage. They are also offered beer and other foods such as sushi.

Famous rikishi Takamisugi apparently ate 65 bowls of chanko nabe in only one sitting!

Following their first meal, they will rest and allow their body to digest the food and turn it into fat and muscle. Training will concentrate on building muscles particularly in a wrestler’s hips and legs. Their core strength and upper body muscles are also incredibly powerful.

Rikishi may train for up to 6 hours per day. Their demanding regime can include exercises like splits, stomps and squats. They will also participate in practice sparring matches including a particularly exhausting training called butsukari where wrestlers spar with one another until they cannot continue due to fatigue.

The type of fat wreslters gain is incredibly important. Most of the fat they possess is not the harmful kind, arterial fat, which can build up around organs and cause serious health problems.

Wrestlers will in fact gain subcutaneous fat primarily – fat which lies just below the skin. This is a product of demanding training and high-calorie diets which produces a hormone called adiponectin. This hormone functions to help deposit recently gained fat under the skin of a wrestler.

Underneath the subcutaneous fat their muscles are incredibly strong and make up most of their weight. For instance, an average wrestler weighing over 100 kg will have a fat mass weighing over 30 kg while their fat-free mass weighs over 80 kg.

Sekitori – upper-league wrestlers – have a surprisingly low percent fat at around 25%. Their force-generation capability is second to none thanks to their combination of muscle and mass. This is why professional sumo wrestlers are considered elite athletes and champion status can only be achieved by very few, top athletes.

Subcutaneous fat also advantages a wrestler by helping to absorb the blows they receive in a fight, in this way it acts almost like a cushion or protective armour. They have also been found to have low cholesterol levels.

Rikishi training monitors the fat and muscle ratio closely. Training and diet help to optimise this without risking wrestler health.

In this way, sumo wrestlers can be considered as healthy despite their obese appearance which is usually associated with severe health problems. Therefore, contrary to popular knowledge, sumo wrestlers are not actually fat as such, they just have a significant mass!

Obesity can be a real problem for wrestlers when they leave the sport. The intense exercising regime keeps them fit and needs to be gradually reduced rather than cut out altogether, otherwise arterial fat gain can pose healthy problems. They also need to carefully reduce their calorie intake.

Fat distribution changes post professional sport threatens a lot of athletes including football players and weight-lifters. It can be common to develop heart problems after you have been a top level athlete.

The intensity of the athletes’ lifestyle can take its toll, with the average life expectancy of retired wrestlers at 55 years – around 20 years younger than the average Japanese male.

3 Heaviest Sumo Wrestlers Of All Time

The heaviest sumo wrestler of all time, Ōrora Satoshi, weighed 288 kg at his professional peak! The highest rank Ōrora achieved was Makushita 43. He was born in Siberia with the name Anatoliy Valeryevich Mihahanov. When he was 8 years old, he saw sumo wrestling on the television and became inspired to enter the sport.

The second heaviest sumo wrestler of all time had a relatively long-standing record until Ōrora Satoshi weighed in at 1 kg heavier! Konishiki Yasokichi weighed 287 kg at his professional peak. His highest rank was Ōzeki – he was the first non-Japanese fighter to achieve this impressive rank.

Konishiki was born in Hawaii with the name Saleva’a Fuauli Atisano’e. He was spotted on the beach when he was 18 years old by a sumo wrestling talent recruiter who offered him the chance to train over in Japan.

The third heaviest sumo wrestler of all time is Ryūichi Yamamoto from Saitama in Japan. He weighed 277 kg at his peak, and is the heaviest Japanese-born rikishi of all time. His best rank was Maegashira 9. Yamamotoyama broke the record for heaviest new recruit, weighing 233 kg when he entered his stable.